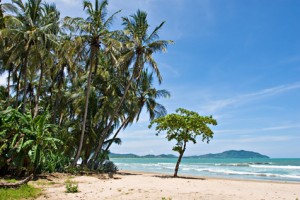 Moving from New York City to a small town in the U.S. is quite a culture shock on its own.

But Rick Macsherry, 60, and Christina Spilsbury, 58, did one better. In 1989, they moved to a small fishing village on Costa Rica‘s northern Pacific coast.

Back then, Tamarindo was tiny and remote, accessible only by a bumpy dirt road that fronted the beach.

“When we moved here, there were only about 50 people, locals and expats,” recalls Christina.

The only foreign visitors were sport fishermen (Tamarindo remains a fishing destination today), pioneering surfers in search of consistently good waves, and a handful of adventurous tourists who stayed at the few small hotels in town. Ticos, as Costa Ricans call themselves, flooded the area between Christmas and Semana Santa, or Holy Week, as they still do today.

But otherwise, Tamarindo was a very quiet place.

Today, it’s a tourist destination and busy little town full of expats of various nationalities—from Italian to Argentinian to Israeli to Canadian. There are restaurants, from take-away to sit-down gourmet of every cuisine. Grocery stores are packed with imported items like hummus and frozen waffles.

But it still manages to retain a funky, laid-back character. It’s a beach town through and through. Where sunset drinks on the beach are the only unmissable appointment on your calendar. And while there might be plenty of tourists walking the streets and laying out on the beach during high season, the town’s long-term residents remain close-knit.

Christina’s grandmother was from Costa Rica, and she had family in San Jose, the country’s capital. So the couple had visited the country before and traveled around extensively. The funny thing is despite their obvious affinity for the place the couple never intended to move here permanently.

But then Christina, a writer, was offered a grant to work on her next project. Knowing the money would be enough to support themselves for a while in Costa Rica, they headed south. And during that year-long stint in Tamarindo, they fell in love with the place. After a short trip back to New York, they moved back to their new home.

Location was a big factor: “I love the beach,” says Christina.

But so was lifestyle.

“We really thought the thing that’s most valuable in life is time,” explains Christina. “We definitely pace ourselves so we have time to enjoy the place we live. And we have a lot of friends. Here there’s time to make friends…and plenty of public space like the beach to meet people.”

Christina and Rick have seen a lot of changes over the years.

Cost of living in Costa Rica, for one, has increased since the 1980s. But…

“We can still afford to have a gardener and a cleaning woman, something we couldn’t afford in the States,” says Christina.

Plus, health care is cheap. The couple feels blessed not to have had any serious medical issues over the years. But they do report that their local dentist charges a fifth of what it would cost in the U.S. for treatment.

These days Rick and Christina keep busy with their catering business, based in Playa Langosta, just south of Tamarindo. The area has become a destination for weddings and large family reunions over the years, according to Christina, and Sunset Catering serves that need. But they still make time for what’s really important.

“We walk the beach and swim every day,” says Christina. “And at the end of the day we always watch the sunset.”

JetBlue Airway announced four weekly non-stop flights to Liberia, in Costa Rica’s rich Guanacaste region, from its home base at New York’s JFK Airport. To celebrate, the airline is also offering an inaugural fare of only US$119 if booked by December 1, 2011 for travel through February 15, 2012.

Liberia, on Costa Rica’s Pacific Coast, will be the airline’s second destination in the country. JetBlue has served Juan Santamaria International Airport in the capital, San Jose, with nonstop service from Orlando, since 2009.

Named after the national tree of Costa Rica, Guanacaste is one of the country’s most popular vacation and ecotourism destinations thanks to nearly a dozen well-known biological reserves, national parks and wildlife refuges. Known as a haven for nature lovers and outdoor adventurers alike, stunning Pacific coastlines are plentiful in this northwestern province, as are the seemingly endless hours of summer sunlight.

“Liberia is a world-class destination with a really diverse set of attractions,” said JetBlue Director Schedule Planning Dave Clark. “We’ll be offering the only direct service from JFK and we’re excited to make it easy for customers to get to the beautiful Pacific Coast of Costa Rica.”

“JetBlue’s inaugural flight to Liberia is certainly a momentous occasion for Costa Rica, as travelers will now have unprecedented access to the country’s Northwest region, home to a bounty of attractions that satisfy travelers’ every need. We look forward to welcoming JetBlue passengers into our country, where they can experience first-hand our rich culture, commitment to sustainability and the happiness that is unique to our country,” commented Costa Rica Minister of Tourism Allan Flores.

Culebra – Snake encounter when showing a home to clients

I have showed Casa Jaguar yesterday to a lady and her friend. When walking around the property she asked me two times if there are snakes. I answered yes, but she should not be worried about them as within the 16 years I’m here, I never known or heard about an incident. When we walked towards the waterfall at the property I saw the snake, just 3 feet right in front of me. Great camouflage this Boa Constrictor (non venomous) I though , she did not move so I made one step back and took a picture with my cell phone. The clients / ladies behind me got excited and we tried to get the dog away from the snake. Too late, the dog sniffed on her and the snake came up in the air with half of the upper body ready to strike, when I saw the rattle going I knew that I was wrong, it was a Cascavel or Rattlesnake. The dog jumped backwards quickly, then the snake stayed a few seconds and then turned around and disappeared in the bushes. Amazing to see on how close we and especially the dog came up to the snake. Back at Casa Jaguar, the owner stated that this is pretty normal, because they live here in the middle of nature. All the years nothing happened to none of the five dogs or 3 cats nor any of their guest or them. Pura Harmonia.

Costa Rica has been and is still a smart option to invest your hard earned money. Its geography, fauna, and beaches along with its political stability, continues to attract investments, ranging from a small home to large projects. An excellent indication of this is the confidence the Inter-American Development Bank (BID) has shown by inaugurating their new building in San Jose this week.

“The BID finances large projects and developments in Latin America. A new Inter-American Development Bank (BID) building was inaugurated in San José on Monday. The BID is a regional entity that supports and finances various development projects throughout Latin America. “The BID has always been a strategic alliance, not only by facilitating financial resources in the areas of homes, health, education, energy, telecommunications, public transportation, science and technology,” said Luis Liberman, the second vice president, Monday night. “But it also provides us with technical support for vital projects such as fiscal planning.”Liberman added that the decision to construct a San José location is an indication that Costa Rica and the BID will continue to work closely together on future development projects.“The BID continues to be a protagonist in the fight to reduce poverty, the promotion of social equality, and to achieve sustainable economic growth in the region,” he said.”

Before the world economic crisis it wasn’t too difficult to obtain a loan from the local banks, either mortgages over your property or to foreigners that needed a loan to purchase a property. Some/most banks here were also appraising properties at higher values than the markets reality, putting many people in difficult situations. Then the crisis came along and banks, very similar to the US banks, basically shut down to the possibility to obtain a loan.
Now that the worst of the crisis seems to be behind us and the recovery, although slow, has begun, the government (Banco Central) is encouraging banks to open up to giving loans to local and foreign investors. While many banks here have announced their “reopening” to loans the reality is that it is still very difficult to be approved for one. If you are planning to jump through the loops and apply for one, be prepared, even though it is not impossible, the process will be extensive and tedious. The prerequisites are very similar to what banks in the US ask for, here are the basics; your ID (Passport), SS#, Income Tax Returns or similar from the past three years, bank statements from at least the last six months and information of any open/active credit that you may have. This is not everything and obviously each case is different and handled individually. If this is your only option to be able to buy your piece of the tropics come prepared with patience and of course the needed documents, it will not happen overnight.
Here is what three of the major local banks offer in interest rates. This is in general and will vary depending on the amount and the time (length) of the loan:
Banco National de C.R.  7.5% –  9%.
Scotiabank  6.75% – 9.5%.
Banco de C.R.  7% – 11%.

Last April 23, Costa Rica celebrated the orchids. Experts gathered 200 of the 1,600 species that can be found in the country. The Guaria Morada is the national flower of Costa Rica since 1939. The Guaria Morada is extremely elegant with its white heart surrounded by purple petals.Orchids are becoming more and more popular among people. While the orchids blossom best in the country’s Central Valley, we manage to keep some in the shady corners of our gardens in Guanacaste.

by The Tico Times

Education, Health, Quality of Life, Economic Dynamism, Political Invironment had been the factors taken in consideration for this interesting report. Here is the ranking just for Latin America where Costa Rica made it after Chile and got rank # 2: ( 36 in the world 100)

Here is the resolution about the Moratorium:

21 pages in total. Starting at page 10, it states the solutions about Playa Tamarindo and then Playa Langosta. Compared to other areas it says that Tamarindo is more complex. Therefore it refers to the recent Decree established by the President until the Plano Regulador is in place and as well the last existing Plano Regulador has to be considered and respected.