Tamarindo – Just Wonderful, Not Only to Surf 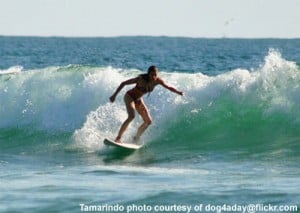 Another nice comment from an independent source, posted by a visitor to Tamarindo on the International Living website – a well-established source to fing great please all over the world.

I’m in Tamarindo, Costa Rica learning how to surf. I’ve hired a local, Ricardo, who we met on the beach a few days ago. Two hours on the water—just $20. It’s a great deal compared to the many surf schools in town. My 5-year-old son is on the water, too. And he’s already an expert, riding wave after wave all the way to the shore. I’m wiping out more than anything… but having a great time.

The beach is the center of life in Tamarindo. And not just for surfing.

While the waves are chest high near the river mouth on the north end of town, calmer waters can be found on the southern end of the beach. That’s where the kayakers and stand-up paddle boarders launch.

Lots to do when you’re not surfing in Costa Rica

And if you’re not into watersports, there are plenty of bars and restaurants where you can enjoy an ice cold Pilsen or Imperial beer and a bowl of ceviche for $5 with your toes in the sand, watching the waves.

Peak time is sunset, when tourists taking snapshots mingle with locals and long-time expats meeting friends or walking their dogs.

Nobody could say that Tamarindo is a sleepy, forgotten beach town. But it has many advantages for expats. No matter what you hear about its level of development, this is no Ft. Lauderdale. It’s is still a laid-back and unpretentious area.

Thanks to a large expat population, you have amenities and services not available in more remote areas: veterinarians and “dog hotels”, grocery stores carrying American brands and gourmet items, medical and dental clinics, and a ton of great restaurants.

The many Italians living here have opened several “ristorantes” and wood-fire brick oven pizza places. And there’s also sushi, bagels, sports bar fare, and other foods not available in most of the country. (I like rice and beans… but it’s nice to have chicken wings every once in awhile, too.)

The most beautiful beaches in Costa Rica

Tamarindo is also within quick driving distance of some of the most beautiful beaches in the country, including unspoiled Playa Conchal and secluded Sugar Beach to the south. The heart of the Nicoya Peninsula, home to the bohemian beach towns of Samara, Nosara, and Montezuma, is just a couple of hours away.

Liberia, the capital of the province of Guanacaste, is just an hour away on modern highway. Need to take care of immigration paperwork or fly back home? Liberia is full of government offices and a growing international airport. Plus it also has outposts of San Jose’s best private hospitals: Clinica Biblica and CIMA Hospital.

Finally, thanks to the large number of expat families here, there are several private schools close by that follow American curriculum and are even accredited in the States.

For a half to a third of the price of similar schools back home, we can send our 5-year-old to a highly-rated private school, something we’d never be able to afford in the States.